According to Forbes research, Digital media, particularly social, search, and video, drove the ad market in 2021, which was stronger than expected at the year’s halfway point. Despite several factors, strong ad spending growth will continue in 2022: The global ad market is expected to exceed $700 billion, with the US ad market expected to exceed $300 billion.

Making sense of CPC, the CPM business model, CPA, and other pricing strategies can be difficult if you’re new to online marketing. On the other hand, choosing the right pricing strategy is critical because it directly impacts campaign spending. So we’ve put together this glossary of digital marketing terms for you.

In this article, you’ll learn about popular advertising strategies, their benefits and drawbacks, and how to decide which one is best for your next campaign.

An ad pricing model is a system a publishing platform chooses to charge an advertiser for displaying an announcement. The nature of a pricing model often hides in its name: for example, cost-per-click literally means you will be paying for every user that clicks the ad.
This pricing model can be viewed as a payment for targeted exposure because users express interest in a given offer by clicking on the ad.

It’s up to each advertiser to set their ‘monthly budget’ and ‘maximum cost per click’ by keyword. Monthly CPC budgets often range from $50 to $500,000 and up.

See how Adsterra protects advertisers from fraud traffic and other malicious activities.

A click could cost anywhere from one cent to ten dollars. Google AdWords, for example, charges $2.58 per click on average across all industries on the search network. The average CPC for display networks is around $0.58. Some of Bing’s and AdWords’ most expensive keywords could cost up to $50 per click.
On Adsterra, the CPC starts from $0.001. Register and create your first cost-effective campaign.
JOIN ADSTERRA

For advertisers, CPC is determined by the type of ad, its placement on the website, the targeted industry, and the amount of advertising booked. For example, banner ad clicks cost more than text link clicks. The cost per click for ads on the home page is higher than for ads on sub-pages. CPC will be much higher in the financial industry due to increased competition.

For publishers, the CPC is determined by the website’s quality, click-through rate (CTR), platform coverage, and relevance to the promotional materials being offered to website visitors.

What Is CPM (Cost Per Mille) or CPI (Cost Per Impression) Advertising?

CPM is a pricing model in which an advertiser is charged a flat rate per 1,000 ad impressions. As a result, CPM is also known as cost per thousand. The CPM model heavily relies on the number of times the ad was displayed; it doesn’t matter if the user clicked on the ad or interacted with it.

For advertisers, it’s ideal for display and branding campaigns. CPM is the best option for publishers because it provides predictable revenue and measurable results.

The CPM protocol usually guarantees a certain number of impressions, which determines the cost. For example, the advertiser will pay $200 if the website has a CPM rate of $2 and guarantees 100,000-page impressions for the advertisement.

What is the cost of an impression?

The cost-per-impression pricing model is popular for digital advertising because of its efficiency, verifiable distribution, and ability to target precisely. Geo-targeting, segment targeting, and ad format affect the average cost per thousand impressions. In addition, the actual cost of CPMs is determined by the advertising material’s placement.

While both pricing models are completely different, they have their unique advantages and disadvantages. However, advertisers can use both to achieve a variety of campaign objectives, including brand awareness and traffic generation.

The cost-per-action (CPA) pricing model is the most common in affiliate marketing. It is a pricing model where advertisers only pay when users perform a targeted action such as installing, clicking, or converting to a lead.

In the cost-per-lead pricing model, advertisers pay when a user views their ad on a website, clicks on it, and then takes further action like leaving their email address. Because a user must complete an action on the advertiser’s site, cost-per-lead takes the process one step further.

Advertisers can charge for specific actions such as downloading a PDF, signing up for a newsletter, becoming a member, watching a video, taking a survey, and so on. This metric is set when creating a campaign.

CPI is a type of CPA model in which advertisers pay a fixed rate per app installation. App marketers who focus on traffic quality rather than quantity to attract highly motivated traffic often use the cost-per-install model. Because of its competitive advantages, the CPI pricing model is prevalent in the mobile ecosystem. Even though the cost per download is typically higher than the cost per click, the budgeting appears to be effective because the client pays for the actual user rather than the ad impression.

How much does CPA cost?

The CPV is a one-of-a-kind purchasing strategy. It is not used for traditional banner ads because, unlike the CPM, it is a cost for a single view (rather than a cost per thousand impressions).

You may come across CPV when creating a campaign using alternative forms of advertising, such as video ads. CPV rates are usually fractions of a dollar, so mistaking the CPV for the CPM can quickly drain your budget.

eCommerce merchants can connect with their relevant audience through CPV advertising, making this model worthwhile for brands looking to increase brand awareness through videos.

The cost per engagement (CPE) is the fixed rate an advertiser pays when a user interacts with an ad. This interaction can include pausing or muting a video or submitting their contact information. As a result, these campaigns can pay very poorly or very well, depending on the ad. What’s the difference between CPA and CPE? CPE is often applied when advertisers require engagement within an app, such as finishing a mobile game level, signing up for a music subscription, or taking your first ride in a rideshare app. Mobile app advertisers use CPE to get high-quality users that prove their value right away. In contrast, Cost Per Action (CPA) advertising is used when an advertiser wants a user to take a specific action outside of an app, usually on the web. Signing up for a subscription or participating in a survey are examples of such actions. The terms CPE and CPA are used differently by different ad networks. As a result of optimizing targeting to meet performance goals, social media networks and programmatic partners charge by the thousand impressions (CPM). In this context, traffic providers calculate the amount of ad spend required to achieve the desired results using the terms “cost per action” or “cost per engagement.”

Calculating the effectiveness of your PPC/CPC, CPA, CPL, or CPM spending

Pricing models are essential for calculating advertising costs. On the other hand, other metrics are useful for determining your PPC/CPC, CPA, CPL, or CPM performance. We’ve compiled a list of the most important metrics to monitor below.

The ROI shows the relationship between your revenue and the costs you incurred. The (ROI) is calculated by subtracting the cost from the revenue and dividing the result by the cost. If your ROI is zero, it means you didn’t make any money from your activity, but you also didn’t lose any. A negative ROI indicates a loss, whereas a positive ROI indicates a profit.

If you’re running a CPI-based mobile app marketing campaign, your conversion rate may be high, and you may have a lot of installs. However, if users never open and use your app, it’s all a waste of investment. This is where LTV becomes important. It calculates the average profit generated by a single user over time, which is far more important than the number of downloads.

LTV is calculated by dividing the average revenue per user (ARPU) by the churn rate. To remain profitable, advertisers must keep the CPA or CPI rate lower than the LTV.

Your click-through rate is another key performance indicator you should keep an eye on. The CTR metric simply measures how effective your campaign is based on how many people click on your ad link or banner.

To get the CTR, you can divide the total number of clicks by the total number of ad views. The higher your campaign’s CTR, the more effective it is. It also helps you discover the most profitable ad placements and the optimization of your CPC campaigns. Include a call to action on your landing page so that people are more likely to click on your link, increasing your click-through rate.

The CR metric is similar to the CTR, but instead of a click ratio, it considers the number of conversions, which are the objectives you set (like a purchase, sign up, or reaching a particular point of a website). The number of total conversions is divided by the number of people who interacted with your ad to get the conversion rate.

So which model should you pick? 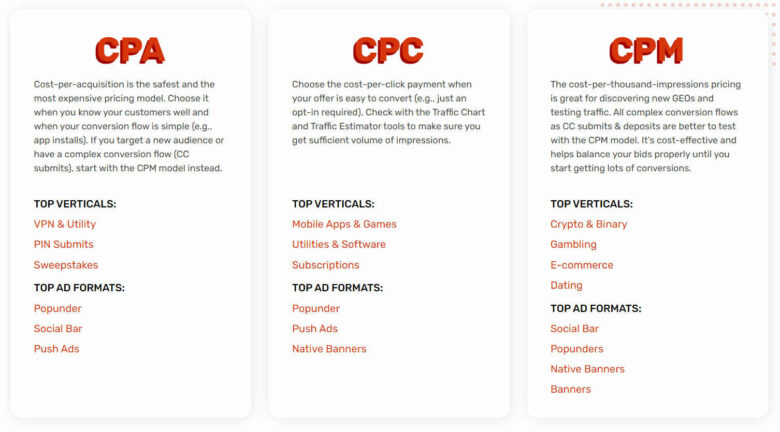 Should you go with the CPA or CPM pricing model? It might seem obvious that you only pay for target actions with eCommerce offers but don’t be too fast to decide. A wise advertiser will go for the CPM pricing model because it is much cheaper and allows for more extended traffic tests. You can win time waiting for users to convert without paying too much. The CPA model suits shorter conversion flows like sign-ins, lead forms completion, installs.

Our previous guides went over CPM pricing life hacks for Gambling and Ecommerce products. In contrast, these guides to promoting VPN and Utilities or Mobile Apps focus you on the CPA pricing specifics.

With Adsterra, every advertiser will find their perfect publisher, while publishers will enjoy solid payouts.

Offers to launch in June

How to survive the latest Google Core Update

How to Buy CPA Traffic With Adsterra SSP:...

7 Ideas for Online Side Hustles that Help...

Get strategic newsletter
Actionable tips delivered in a digestible form
*the field cannot be left blank
You can easily unsubscribe by clicking the Unsubscribe link inside any email.
Ad Market Ltd., Cyprus, is the controller of your personal data. It will be processed to send you our emails and newsletters and for our marketing purposes. Please see more information here here
×