The 4 Best Ways to Monetize Websites 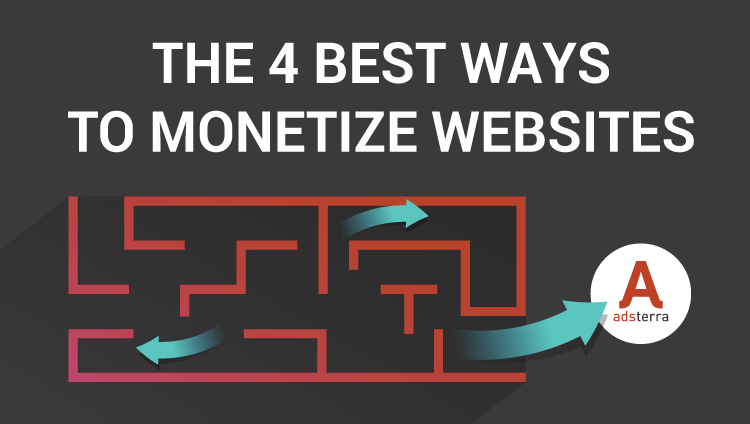 People have been trying to figure out the best way to monetize websites for years, but these four monetization models are the ones which really work

For as long as the internet has been around, people have been trying to make money from it. So what is the best way to monetize websites? Sometimes, it depends on the website, but it is also a fact that some monetization models work better than others.

4. Ask and You Shall Receive

Make your website free at the point of use and ask your visitors and users for voluntary donations. It sounds ridiculous; it sounds like the blue-sky, utopian thinking of someone with no idea of how business works. Yet it’s a system which does work… for certain business models.

Wikipedia is by far the most famous example of this donation model. It is the fifth biggest website in the world, receiving more traffic — and having more web authority — than Yahoo, Reddit, Amazon, Twitter, or Instagram. Yet, despite Wikipedia’s immense success, it has not made a penny from affiliate marketing or subscriptions. All of its revenue — all of it — comes from voluntary donations. The entire website is completely free to use, yet people choose to give Wikipedia money to continue providing the world with its immense encyclopedia.

This model has worked for extremely well for Wikipedia, but it’s also worked for other websites and online business people. Patreon is a website which allows other websites and internet creators to fund their projects through donations. It’s become an increasingly popular way to fund YouTube content.

The Guardian also adopted a donation model rather than opting for the paywall model that other news publications have been using. Paywalls can be separated into two types: soft paywalls and hard paywalls.

3. Soft Paywalls for Websites Who Want to Get You Interested

Soft paywalls work by allowing a trial period, with further offer to pay to have an access to additional or premium content.

The Telegraph and Harvard Business Review are just two examples of websites with this sort of wall. However, while this system was popularised by news websites, they aren’t the only ones who are using it.

YouTube has also adopted a soft paywall, with some channels offering extra or premium content over on YouTube Red. For some websites, though, soft paywalls don’t quite generate income quick enough. For those sites, hard paywalls are the way to make money.

2. Hard Paywalls for Websites Who Know They Offer Premium Content

When we think of paywalls, we often think of news. However, Netflix is probably the best example of a successful hard paywall. Critically acclaimed television series and movies such as House of Cards, Narcos, and Beasts of No Nation are hidden behind an unrelenting paywall.

A one-month free trial is an option, but only after Netflix has your card details. Lead generation like that works, and it works well. In fact, some marketers use Netflix’s lead generation as the yardstick by which all other lead generation campaigns should be measured.

Hard paywalls have also worked for news websites with a specific audience. The Wall Street Journal, like Netflix, prides itself on premium content. As such, people are more than willing to pay for it.

Hard paywalls are the best way to monetize websites if that website can offer premium and exclusive content. Exclusive is the key word there. Because of Netflix’s unique relationship with studios and the Wall Street Journal’s unique relationship with Wall Street, a hard paywall really is the best way to monetize those websites.

For everyone else, however, the best way to monetize websites is quite simple…

By far the best way to monetize websites is to contact Adsterra. Register with us, get a code to place on your site and earn money instantly.

Last month alone, Adsterra generated 600,000 leads through its adverts. As a result, advertisers are willing to pay a lot of money for us to feature quality adverts on quality publications.

Our adverts are safe, high-quality, and generate revenue for a wide variety of publications. So, if you want to monetize your website, contact us today.

Adsterra is the best way to monetize websites. Register with us and start earning money right now!

How to monetize traffic with direct link and no website

How Adsterra Works | A Product Tour for...

How to Become a Successful Entrepreneur: Tips and...

Ad Campaign Optimization With No Frills. A Checklist...